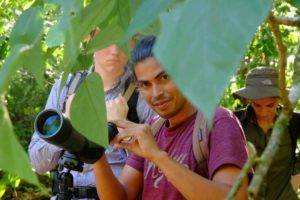 Even though puma attacks have been very rarely documented in Corcovado National Park, some cases have occurred in the last years. We will talk about how possible it would be and how to behave during a puma encounter.

During many years in Peninsula de Osa I’ve heard about stories of pumas chasing people down or facing people on the trails by sitting in front of them in a challenging behavior, looking for a clue of weakness to attack.

I was born in a property bordering Corcovado National Park, in Los Planes Ranger Station area, it was in 1987, the only one neighbor we had by the time was 15 minutes away from home. It was very isolated and the only one way to move around was by horse or on food, and my family was 1 of the first 5 families to reach that area when it was only forest and wild animals.

I heard my first stories from my mom when I was very little, the first one was when a puma was stalking me in front of my house, we had a hunting dog named chester, and it saw the puma coming after me so it ran towards it to defend me but it was chained and when the chain got pulled by the dog it made a loud sound and scared the puma away.

My First Encounter With a Puma in Corcovado National Park

When a first saw a puma (that I remember of) was when I turned 23 and was visiting Corcovado National Park very often, always with other older guides to get the experience needed to be able to perform as good as possible.

It was during a summer season, maybe march because it was very dry. We were walking with other tourists, observing and taking pictures as well as listening the information given by the leading tour guide, when monkeys starting making a noise I had not heard before, the guide said it was the alarm the monkeys displayed when a predator was seen by them, we opened our eyes towards the sound and soon we saw a puma running thru the bushes.

This time there was no chance to take a photo or to really appreciate the shape of the puma but it was a moment that made happy.

After so many stories I had developed certain fear for pumas. I always wanted to find them because it meant a huge experience for my clients and I did my best to find one, following prints, the sounds of the monkeys and looking in the areas where they had seen one before.

With time I developed a very good sense to find pumas and even recognized their smell and knew where some of them whent to rest very often wich made pressure on me because some tourists wrote about my skills and they looked for me for that reason to do Overnight Tours in Corcovado.

I also learned how to read them and see if they were stressed by my presence or not. Some pumas did not care at all while some others got a bit concerned about me and the tourists.

What to do if a puma attacks you

The only cases I heard from tour guides of real puma attacks who visited the park since 1995 were 2 and no on got really hurt, only very scared! So, my conclusion is that due to all the experience I have had, I dare to say that it is very unlikely that a puma attacks you and it is even more unlikely with the companion of a local tour guide who knows the behavior of the animals and would know how to proceed with the different reactions of pumas.

Here are some of the techniques used to get rid of the big cats:

In this piece of information we put together the bus connections and timing, and schedules of the buses to make it from Monteverde to Drake Bay or Puerto Jimenez. Read the information whole because it might look that it loses its sense but I promise it does not.

Items list to bring to Costa Rica for your vacations PDF

It is totally understandable that when thinking of Costa Rica as your next destination to spend vacation time one only thinks of sun, beaches, animals, and adventure, but ignore the fact that in some places it can be cold, muddy or rainy.
You can decide what item could be of help and add it to your luggage.

Costa Rican typical Foods You Might Not Find In Restaurants

Costa Rica has many delicious foods that are sadly not present in most of the restaurants in Costa Rica, however most of them offer the casado and gallo pinto in their menu. I will mention some of the typical foods we eat at home in the different areas of the country and where to get them.